The Pack is Back! Teen Wolf: The Movie Roars into the Metaverse

Return to the town of Beacon Hills in Werewolf Escape; An all-new survival gameplay experience on Roblox designed by Super League

SANTA MONICA, Calif., Dec. 21, 2022 (GLOBE NEWSWIRE) -- Super League Gaming (Nasdaq: SLGG), a global leader in metaverse gaming, and Paramount Media Networks & MTV Entertainment Studios announced today the thrilling launch of Werewolf Escape, an all-new experience on Roblox, a global platform bringing millions of people together through shared experiences. As a companion to the upcoming premiere of Teen Wolf: The Movie streaming January 26, exclusively on Paramount+, it's hunt or be hunted for dedicated and new fans alike as the town of Beacon Hills faces a terrifying threat. Players launch into matches in this immersive virtual world as a Wolf, Villain, or Human. Those assigned as villains attempt to capture all of the wolves before they can make their dramatic escape.

Custom designed and produced by Super League, the town and residents of Beacon Hills are in great peril, and it's up to the wolves and humans to save the day. As players enter the lobby, they are immediately met with a fast round of survival gameplay, where each character - Human, Werewolf, or Villain - are randomly assigned for the match. Here they must strategically make their moves to win the game before time runs out. To add to the intrigue and excitement, players can collect and earn tokens throughout the game and level up to unlock new character skins. Starting in late January, an NPC in the game lobby will even offer players a promotional code to use for a limited 30-day trial of Paramount+ ahead of the release of Teen Wolf: The Movie.

“Survival and thriller games are two of the most popular genres on Roblox, so when strategizing with our partners at Paramount+ on how best to bring Teen Wolf to life, this style of game play was the perfect fit,” said Mike Wann, Chief Strategy Officer at Super League. “As an early investor and a beloved ongoing partner in Super League, this latest activation introduces players to the new characters and locations from this film, while also re-engaging them with the previous world of the Teen Wolf franchise we all know and love.”

"We are thrilled to once again partner with Super League Gaming to explore the metaverse in a new way, following incredibly successful activations earlier this year around the VMAs and Wild 'N Out," said Ann Lamore, Vice President of Marketing Social Media, Paramount Media Networks & MTV Entertainment Studios. "We're looking forward to seeing how much Teen Wolf fans will enjoy this engaging and immersive gameplay experience."

Streaming exclusively on Paramount+ starting January 26th, Teen Wolf: the Movie brings audiences back to Beacon Hills as a full moon rises, and with it a terrifying evil. The wolves are howling once again, calling for the return of Banshees, Werecoyotes, Hellhounds, Kitsunes, and every other shapeshifter in the night. Only a Werewolf like Scott McCall - no longer a teenager, yet still an Alpha- can gather both new allies and reunite trusted friends to fight back against what could be the most powerful and deadliest enemy they’ve ever faced. The film is produced by MTV Entertainment Studios and MGM.

Paramount Media Network and MTV Entertainment Studios and Super League have now partnered on multiple immersive campaigns and activations with significant success, including the MTV Video Music Awards (VMAs) and the premiere of Wild ‘N Out earlier this year. The Wild ‘N Out initiative, launched to celebrate the 300th episode of the show, featured four live streamed episodes of Minecraft gameplay and reached 37 million people across YouTube, Tik Tok, Twitch, Instagram, and Minehut, Super League’s thriving Minecraft community. The epic VMA Experience brought the iconic awards show to the metaverse for the first time ever. The bespoke immersive environment featured exciting activities like a virtual red carpet, three mini-games, and a meet-and-greet with Italian rockers Maneskin. All told, nearly two million players visited the game, collecting six million MTV tokens over the three-week activation. In addition, one and a half million fans cast their votes for the first ever Best Metaverse Performance Award.

About Paramount+
Paramount+ combines live sports, breaking news and a mountain of entertainment. The premium streaming service features an expansive library of original series, hit shows and popular movies across every genre from world-renowned brands and production studios, including BET, CBS, Comedy Central, MTV, Nickelodeon, Paramount Pictures and the Smithsonian Channel. The service is also the streaming home to unmatched sports programming, including every CBS Sports event, from golf to football to basketball and more, plus exclusive streaming rights for major sports properties, including some of the world’s biggest and most popular soccer leagues. Paramount+ also enables subscribers to stream local CBS stations live across the U.S. in addition to the ability to stream other live channels: CBSN for 24/7 news, CBS Sports HQ for sports news and analysis and ET Live for entertainment coverage.

For more information about Paramount+, please visit paramountplus.com and follow @ParamountPlus on all social platforms.

About Paramount Media Networks & MTV Entertainment Studios
Paramount Media Networks & MTV Entertainment Studios is one of the preeminent media entities in the world that connects with global audiences through its iconic brands – MTV, Comedy Central, CMT, Pop, Logo, The Smithsonian Channel, Paramount Network and TV Land – and its Studios arm which produces acclaimed series and movies as well as award-winning documentaries through MTV Documentary Films.

A photo accompanying this announcement is available at https://www.globenewswire.com/NewsRoom/AttachmentNg/b9531a95-82a2-4f3e-b1cd-fdff1166b992 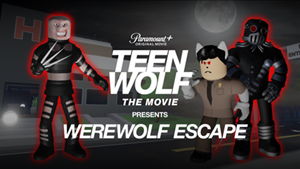 Teen Wolf: The Movie Roars into the Metaverse